All over the world, we are witnessing consequences of climate change, such as melting glaciers, bleaching corals, draughts, floods and extreme weather fluctuations. Moreover, air pollution has a negative impact on human health such as the spread of cardiovascular diseases, chronic obstructive pulmonary disease, cancer or asthma. Besides the impact on human health, acidic rains threaten the natural environment of many animal species and endanger biodiversity.

The marine industry has a significant representation in global emission production (see the graph below), both CO2 and local emissions. In accordance with Paris Agreement, International Maritime Organization (IMO) adopted an initial strategy for the reduction of greenhouse gas emissions from ships, known as IMO 2030. To prevent air pollution by ships by NOx, SOx and particle matters, four Emission Control Areas (ECAs) were introduced. In these areas, there are even stricter controls on airborne emissions compared to the rest of the world (see the map below):

The cruise industry recently got negative attention in media coverage regarding increasing emissions around cruise lines. The industry has to react on customer demand for conscious traveling, making their business model more sustainable and there is a competition aspect as well. Besides these positive attitudes, local regulators are restricting access of cruise ships with high emissions to vital locations such as the Norwegian fjords. 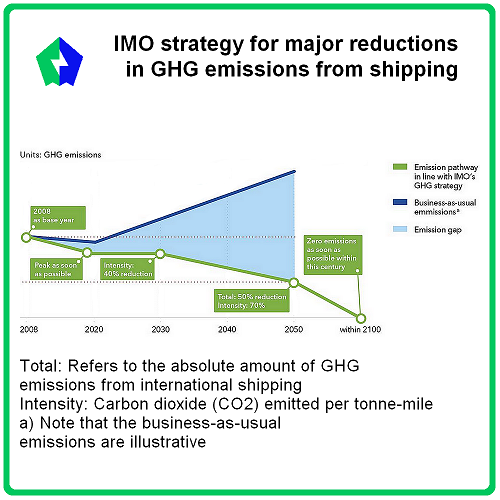 This EU-funded project NAUTILUS plans to reach the IMO targets of 2030 by increasing the energy efficiency of the propulsion system by 10%, reduce CO2 emissions by 40% and other air pollutants by 99%. The NAUTILUS project strives to reduce air emissions in maritime transport by introducing an alternative power generation system, electrification and the use of LNG. Additionally, the use of alternative fuels and energy management is researched.

To reach these goals and to fill the imposed emission requirements, a novel technology approach have to be introduced. The consortium of the NAUTILUS project aims to design and engineer the power plant, integrate it with the ship’s system and use an effective control strategy to manage the whole system.

The technology examined by the NAUTILUS project is the application of the Solid Oxide Fuel Cell (SOFC) system in a cruise ship. This approach is novel, as the SOFC systems were developed primarily for stationary applications and their usage in marine conditions has not been tested yet. Needless to say, the marine application is very different, especially due to wave-induced inclinations and acceleration of the ship.

About the SOFCs technology

SOFCs are electrochemical devices that convert chemical energy directly to electric energy. They differ from polymer electrolyte membrane (PEM) fuel cells, because SOFCs operate at high temperatures. Although this introduces challenges in operation and the system is more space-demanding, this feature also leads to fuel flexibility, because some fuels can be internally reformed and this leads to high conversion efficiency.

However, there are also some challenges

LNG-fueled SOFCs can reduce GHG emissions by 40% and other pollutant emissions to a negligible level.

Cruise ships generally have diesel-electric propulsion, with power plants that cater all heat and power needs of the vessel. A SOFC system has been designed that is adapted to the marine environment. During the process design many investigations have been performed, for instance, a heat exchanger network optimization and a variation of the pre-reform ratio. The result is a system with an efficiency of 59%.

In order to prolong the stack lifetime and reduce the stress on the catalysts, anode recirculation loop is investigated to further increase the system efficiency. An optimal efficiency of 64% was found when 40% of the fuel stream is recirculated.

The power plant must be able to accommodate large changes in power supply, for instance during acceleration of the ship or maneuvering in the port. Since SOFCs have low transient capabilities, they are generally supported with batteries for load transients and peak coupling.

A battery management unit is being developed to control the battery, which is based on the required state of charge. The behavior of the battery has been modelled based on experimental data with high accuracy.

SOFC modules generally have relative low power (around 1-100 kW), the NAUTILUS project is developing a concept to scale-up the module to a marine SOFC power plant. The methods to effectively integrate the SOFC systems with the heating grid and electricity grid of the ship are investigated. The aim is to develop a modular concept that can be adapted to the required power in the ship. The power plant should be able to cater to different energy demands and different operational profiles of ships (steady sailing, maneuvering, anchored).

An energy management system is in development to effectively control the power supply of the fuel cell and the battery. It is beneficial for the lifetime of the fuel cells when their operation is as stable as possible. When there is a quick increase in power demand, the power supply of the SOFC slowly increases and the battery is discharged to ensure the power demand is met (see pink color in the chart below). Vice-versa, when the power demand decreases, the batteries are charged, because the SOFC reacts more slowly (in green). The energy management system is evaluated for various operational profiles.

Besides the conceptual development, the consortium is doing experiments to prove the whole concept. A 30kW fuel cell module developed by SolidPOWER has been placed in a test bench at DLR. Steady-state and transient experiments with the SOFC and the battery will be performed to characterize the performance and behavior of the fuel cell system.

To proof that an SOFC system can actually be effectively integrated in a ship, the consortium is developing a 60kW containerized demonstrator. The demonstrator will be a plug and play module that needs connections with the electric, exhaust, heat, water and fuel network of the ship. During the development of the demonstrator, it was found that there are many design choices for which the optimal configuration is not yet known. For instance, power split between SOFC and battery or the centralization of different components such reformers and exhaust pipes .

Currently, SOFCs are mainly used in in stationary applications, which is very different to marine applications. At the current state of research, it is not known what is the effect of wave-induced inclinations and acceleration on the performance and safety of the SOFC system.

That is why the NATUILUS project is planning to test the performance and structural integrity of a 6 kW SOFC system on an inclination platform. The marine conditions have been defined on which the SOFC system will have to operate and the test-bench is in development. Although outside the scope in this research, the effect of structural vibrations also requires further investigation.

The concept designs and fuel cell experiments are using LNG, since this fuel is most commonly used in SOFC systems and the majority of commercial systems are adjusted to it. However, other alternative fuels are in consideration in the marine industry. So that is why a part of the NAUTILUS project evaluates the performance of marine SOFC power plants with alternative fuels. Besides LNG, four other fuels were selected on the basis of availability, technical, economic and environmental criteria. LNG, methanol, Fischer-Tropsch diesel, ammonia and hydrogen were selected to be further evaluated.

Using a different fuel has major implications for the SOFC power plant. Some fuels require additional components such as reformers and evaporators. This in the end has influence on the performance of the fuel plant in terms of size, efficiency and cost. A reference plant was established and for each fuel and model was extended with all necessary components relevant to that fuel. For every fuel a suitable power plant was designed and thermodynamically modelled.

The electric and heat efficiency of the different fuels are compared with the thermodynamical analysis – see graph below:

The highest electric efficiency was found for methane, and in regard to heat efficiency, ammonia scored the best in the highest heat efficiency. Using carbon-fuels reduced the power of the SOFC with approximately 15%, which would practically mean more modules would need to be installed.

An additional investigation in the heat integration with the ship showed that the quality of the exhaust stream is not always sufficient to recover heat for the saturated steam net of the ship. But an improved SOFC system with air recirculation significantly increased the heat regeneration capability. Other power plant performance parameters, such as power density and specific cost still need to be compared for the different fuels.

In spite of progress in some parts of this complex research, there are still challenges for reaching a technically and economically feasible system:

Stay in touch with us!

⇒ Follow us on Twitter/LinkedIn to be on board.