The Energy Management Unit of the Hybrid Propulsion System (Genset) 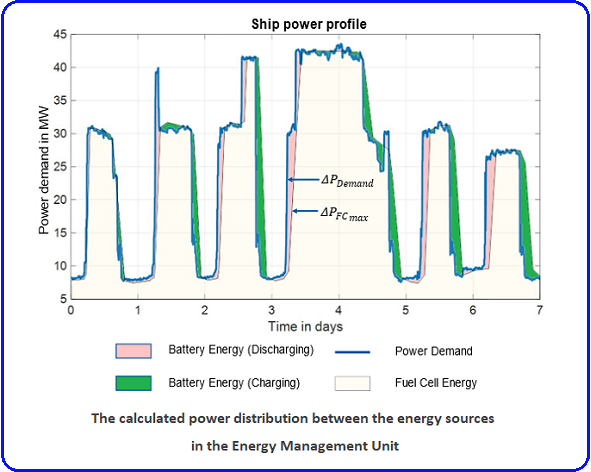 The propulsion system of a large passenger ship is a complex system that is responsible to cater all heat and power needs of a vessel itself, including the hotel complex.

The energy system of the ship aside from a technological complexity has to fulfil all safety and emission regulations. The power demand of the ship is not linear as the ship is docked in the port for an important margin of an operation time. The technology solution examined by the NAUTILUS project has to overcome all the above-mentioned obstacles.

The output power dynamics of a solid oxide fuel cell (SOFC) system is to a value of ΔPFCmax due to various mechanical and electrochemical processes involved. Thus, during load transients (ΔPDemand), the SOFC is not able to ramp up or ramp down instantaneously and therefore cannot keep up with fluctuations and dynamics (ΔPDemand > ΔPFCmax) in the power demand. Due to limitations of the SOFC’s power output, power demand needs to be delivered by an additional energy source. The battery storage system of the NAUTILUS propulsion system is a lithium-ion battery pack. (See the Schematic design of the cruise ship's Genset under the Article "A novel hybrid propulsion system (Genset) of a cruise ship powered by a solid oxide fuel cell and a lithium-ion battery".

The power distribution is managed by the Energy Management Unit which is developed within one of the work packages of the NAUTILUS project. This Energy Management Unit is designed based on power profile data of multiple cruise ship types provided by project partners from the NAUTILUS consortium. In this control strategy, the SOFC is considered to be the primary source of propulsion power, while the battery storage system will play a supporting role by delivering the load transients. In such control, the battery will provide the difference between load demand and the SOFC output power during load transients.

An additional feature of the Energy Management Unit is to maintain the state of charge of the lithium-ion battery pack at a midway (i.e., around 50 % state of charge). This will ensure that the battery is capable to provide power flow in both directions at the point of operation and thus be able to react flexibly on power demands in peaks as an additional source of energy and in the decrease of demand the battery could serve as storage for surplus energy.

Currently, the Energy Management Unit is being developed and tested based on simulation models of both propulsion components, the SOFC, and the battery storage system. In 2022, the real SOFC and the lithium-ion battery will be coupled in a proof-of-concept test environment at DLR premises. The Energy Management Unit of the hybrid propulsion system is the next piece to solve in the jigsaw called the modern low emission passenger ship.

Stay in touch with us!

⇒ Follow us on Twitter/LinkedIn to be on board.